New York covers 54,555 square miles (141,300 km2) and ranks as the 27th largest state by size. The Great Appalachian Valley dominates eastern New York and contains the Lake Champlain Valley as its northern half and the Hudson Valley as its southern half within the state. The rugged Adirondack Mountains, with vast tracts of wilderness, lie west of the Lake Champlain Valley. 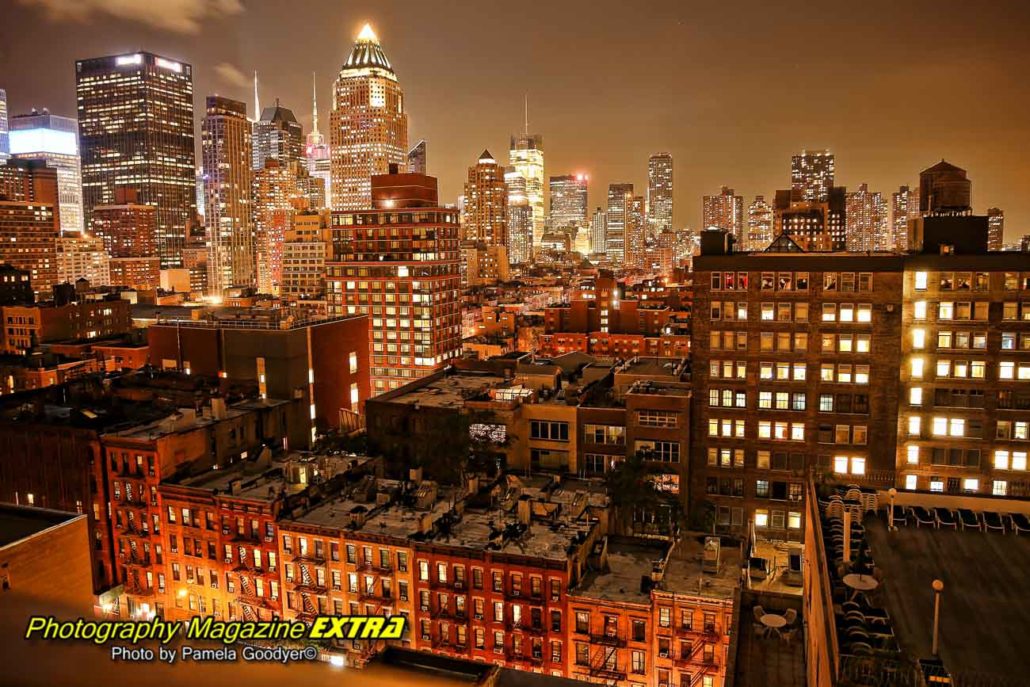 City Image to the right: Shot by Pamela Goodyer during Fashion week from the hotel window. One of her all-time favorite nights and shots.

A big Thank you to Willie Hall, Fashion Designer Extraordinaire, for inviting us to Fashion Week.

She has worked on various celebrity garments such as Elizabeth Taylor and Stevie Nicks and sketching for Michael Jackson and others. She has also been featured in The New York Post, Heart and Soul, Grace Today, Versus of Virginia, Virginia Pilot Newspaper, Sheen Magazine, DAMM Magazine, New York Fashion Week, Virginia Fashion Week, Miami Fashion Week, and behind-the-scenes of Project Runway. Courtesy of BTE-TV, I received the Designer of the Year Award in 2009. April 4th, 2011, she was featured in Jet Magazine, 2012 Fashion Avenue News, I-Fashion Magazine, and Local News Papers in her community.

The Hudson River begins near Lake Tear of the Clouds and flows south through the eastern part of the state without draining Lakes George or Champlain. Lake George empties at its north end into Lake Champlain, whose northern end extends into Canada, where it drains into the Richelieu River and then ultimately the Saint Lawrence River. Four of New York City’s five boroughs are situated on three islands at the mouth of the Hudson River: Manhattan Island; Staten Island; and Long Island, which contains Brooklyn and Queens at its western end.

The state’s most populous city, New York City makes up over 40% of the state’s population. Two-thirds of the state’s population lives in the New York metropolitan area, and nearly 40% lives on Long Island.[9] The state and city were both named for the 17th-century Duke of York, the future King James II of England. With an estimated population of 8.55 million in 2015, New York City is the most populous city in the United States and the premier gateway for legal immigration to the United States. The New York Metropolitan Area is one of the most populous in the world.[13][14] New York City is a global city, home to the United Nations Headquarters and has been described as the cultural, financial, and media capital of the world, as well as the world’s most economically powerful city. The next four most populous cities in the state are Buffalo, Rochester, Yonkers, and Syracuse, while the state capital is Albany.

New York has a diverse geography. The state is bordered by New Jersey and Pennsylvania to the south and Connecticut, Massachusetts, and Vermont to the east. The state has a maritime border with Rhode Island, east of Long Island, as well as an international border with the Canadian provinces of Quebec to the north and Ontario to the northwest. The southern part of the state is in the Atlantic Coastal Plain and consists of Long Island and several smaller associated islands, as well as New York City and the lower Hudson River Valley. The large Upstate New York region consists of several ranges of the wider Appalachian Mountains, and the Adirondack Mountains in the Northeastern lobe of the state. These more mountainous regions are bisected by two major river valleys—the north-south Hudson River Valley and the east-west Mohawk River Valley. Western New York is considered part of the Great Lakes Region and borders Lake Ontario, Lake Erie, and Niagara Falls. The central part of the state is dominated by the Finger Lakes, a popular vacation and tourist destination.

New York had been inhabited by tribes of Algonquian and Iroquoian-speaking Native Americans for several hundred years by the time the earliest Europeans came to New York. French colonists and Jesuit missionaries arrived southward from Montreal for trade and proselytizing. In 1609, the region was visited by Henry Hudson sailing for the Dutch East India Company. The Dutch built Fort Nassau in 1614 at the confluence of the Hudson and Mohawk rivers, where the present-day capital of Albany later developed. The Dutch soon also settled New Amsterdam and parts of the Hudson Valley, establishing the multicultural colony of New Netherland, a center of trade and immigration. England seized the colony from the Dutch in 1664. During the American Revolutionary War (1775–1783), a group of colonists of the Province of New York attempted to take control of the British colony and eventually succeeded in establishing independence.

Many landmarks in New York are well known, including four of the world’s ten most-visited tourist attractions in 2013: Times Square, Central Park, Niagara Falls (shared with Ontario), and Grand Central Terminal.New York is home to the Statue of Liberty, a symbol of the United States and its ideals of freedom, democracy, and opportunity. In the 21st century, New York has emerged as a global node of creativity and entrepreneurship, social tolerance and environmental sustainability. New York’s higher education network comprises approximately 200 colleges and universities, including Columbia University, Cornell University, New York University, and Rockefeller University, which have been ranked among the top 35 in the world.